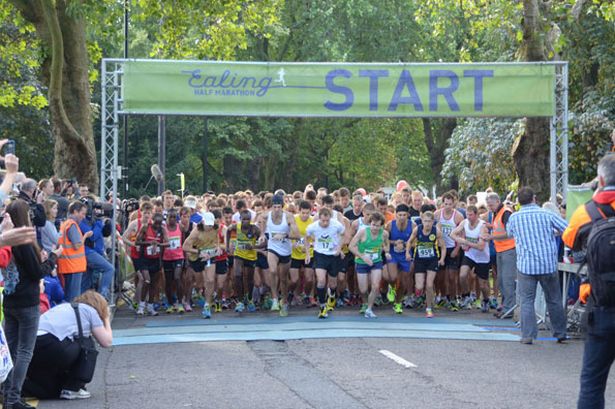 Prior to the 2013 Ealing Half Marathon, the event organisers contacted Run-Fast and very kindly asked if athlete / manager Tom Payn would give a presentation on distance running to people who were taking part in the race. One of the attendees, Adam Kirk-Smith, had to pull out of Ealing due to injury and would be taking part as a volunteer instead. Adam is a member of the London Heathside Athletics Club and this is his account of the day.

Getting up in the dark at 5:50 on a Sunday morning isn’t part of most people’s ideal day. But neither is running 13 consecutive miles, plunging your body into an ice bath, or swapping a welcome lie-in for a morning run.

I often struggle to explain to people why I care so much about running.

“So it’s just the same thing, over and over again, as you get more and more sore and tired?”
“Yeah, pretty much”

“And you don’t get any money for it?”
“No, not unless you’re spectacularly good”

Many conversations tail off here, even when I passionately wheel off the benefits of running: reduced stress, blood pressure, weight and heart rate, and keeping going well past your 60s)

And to a degree, I used to feel the same. I always ran playing hockey and football at school, where my desire to cover every blade of grass made up for a glaring lack of co-ordination and talent. Running was always just a thing I did in order to do accomplish things: the idea of doing it ‘for no reason’ would have seemed mad.

After moving to London, without hockey or football, I needed a new sport. So I started running. And l adored it. Since then, I’ve looked forward to races and my local parkrun (Finsbury Park) every weekend.

One of the races I had been really looking forward to running was the Ealing Half Marathon, which I’d set as a light at the end of the tunnel after finishing my Masters dissertation. My morning 10 mile runs had started to seem a bit short and I was happily anticipating the prospect of challenging myself over a longer distance. Sadly, injury unkindly intervened, with a strained medial knee ligament (sounds worse than it is) keeping me out of the action

I emailed the race organisers about swapping my place. They said: “sure, would you like to volunteer instead”? I’d never volunteered at a race, but I had marshalled at my local parkrun with an enthusiasm that might be described as ‘exuberant’ and I jumped at the chance to test my skills on a bigger stage. There was also a mention of free sandwiches on the day.

I decided to go with my specialism and be one of the marshals. I received excellent email support about the course and what was expected of me but I was worried about directing traffic. If I was as successful as in Finsbury Park, with my plaintive “look out, runners coming through” failing to deter determined children and resolute old ladies from crossing the path, my position was likely to leak cars like an M1 diversion into the Irish Sea.

When I arrived at Ealing I hobbled as quickly as I could (unwise) to St. Peter’s church where our section was based. I was greeted with a warm welcome and after asking about sandwiches (very wise!) I headed out on my way with two and some advice about my position and what I could expect during the race.

One sandwich disappeared before I’d even reached my station. On the way I saw another volunteer, whose name was Mireck, and stopped to chat. Claudia, his girlfriend, later joined us and we talked until necessity sent me to my post.

I came to my marshalling point I feeling really happy and positive about the day. There was no rain, I’d made some friends and still had a tasty sandwich left. If this were a work of fiction there might be some kind of exciting twist. Sadly / happily, there isn’t: I watched more than four thousand runners come past, with few escaping enthusiastic applause and a shout of “great running!”.

Many runners gave me a grateful smile or a thumbs up, which was fantastic, but one of my favourite moments was when a couple of young guys dashed towards me, away from the main crowd. My first thought was that if these two lads wanted to cut the corner, there wasn’t much I could do to stop them. I steadied myself for a confrontation. They raised their hands towards me; I heroically tried not to look terrified. Moments before the expected cheeky slap in the face, I realised they were looking for a high five! After delivering two emphatic hand slaps, I laughed and roared my good luck after them.

I saw several of my friends among the thronged masses, and it was a delight to see a friendly face turn around, looking bemusedly for the direction from which their name had been shouted. I couldn’t wipe the smile off my face at getting the chance to support those I’ve run with. But this wasn’t the best bit.

What I liked most was that this event really matters to the people of Ealing. A local family came out to stand near my station to watch the race and cheered everyone from the first runner, Matthew Kimutai, who finished in a blistering 64:33, and stayed until the very last one had passed. I had a nice chat with them as I walked back, and felt like I was part of something that wasn’t just a bunch of people (admittedly, a bunch that would fill many football grounds) getting together to run. It was a whole town getting involved in the event. We really got a sense of that at in Lammas Park, when we met up with Mirek and Claudia’s friend Rachel, who we walked to the finish with. The atmosphere there was incredible, it felt like a carnival, with thousands of people milling around the green field, dotted with food stalls and exhausted but delighted runners lying in a daze on the grass.

Having said all that, there are downsides to volunteering. Mirek and Claudia told me how lucky I was not to have to deal with irate parents whose kids missed their rugby practice, or a lorry driver who exchanged some choice words with other volunteers. It takes effort, and sometimes things go wrong. If I had the choice between only running or only volunteering, of course I’d run, I’ve got to be honest.

But that’s not the choice. I’ve got the volunteering bug now, having volunteered as a photographer at the Serpentine 5k two days before. The Oxford Half, another race I had to pull out of, is next on my volunteer calendar. My heart’s still set on a London Marathon Championship Qualifying time before the end of December, but that can wait for the moment.

This was by far my favourite volunteering experience, and not just because of the free 2014 entry (or even the sandwiches). It felt both huge and local. The race director, Kevin Walker had talked about “making an event that appealed to both elites and fun runners” last Wednesday, when Tom Payn talked to the assembled running fanatics in the New Inn and introduced the athletes who would become the first male and female finishers three days later.

For me, the Ealing Half Marathon did that brilliantly. I loved volunteering but I can’t wait to take part as a runner next year.

As the races thrive and grow, the amount of manpower it takes to put on an event rises. Without the time and effort donated by volunteers to marshall, run the water stations, hand out medals and all of the other roles which make a race a success many events would simply not survive. To become a race volunteer simply contact the organiser through the event’s website.