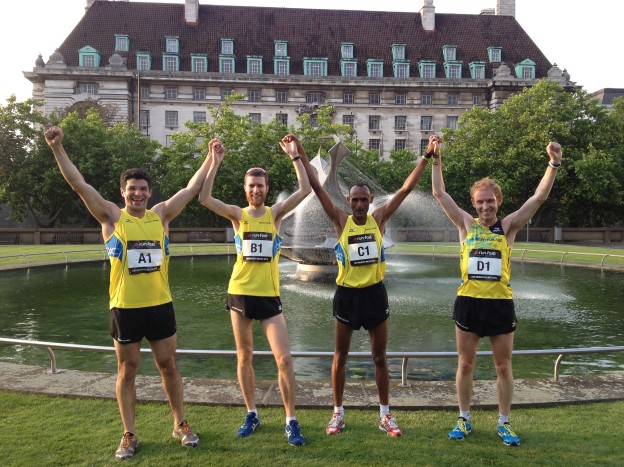 In the shadow of Big Ben on a lovely summer evening (honest!) more than 700 runners gathered to compete in the annual LBH Bridges Relay.

Organised by the Stock Exchange Athletics Club, the race is open to affiliates of the London Business Houses group and local running clubs. Starting on the stroke of 7pm, the 2.3 mile route takes each runner up the Albert Embankment, over Vauxhall Bridge, down Millbank and back over Lambeth Bridge to the start point.

First up for Run-Fast, Greg ‘King Daddy’ King-Underwood. A member of the Run-Fast athletics club (and one of our shop’s best customers) Greg set out at a confident pace, no doubt spurred on by his rather fetching personalised team kit. At the moment we haven’t had any times confirmed but we believe Greg was back well within 15 minutes and was one of the first 15 runners to return.

The second leg was run by Run-Fast store team member and freelance sports writer James Ruskin. Even though he didn’t have a chance to fill up with his trusty pre-race fuel (a pack of custard tarts and a stack of Scotch pancakes) James pegged it round in under 13 minutes, putting the team in the top 10.

Third man to step up to the plate was Tewodros ‘Teddy’ Shiferaw. He might look like an elite athlete but Teddy is actually in insurance, lives in Brockley and doesn’t do much running…er… You can imagine our surprise when Teddy cruised by at an astonishing pace. Even more surprised when he returned about 11 minutes later, comfortably at the front of the race. It made me wonder if he’s done this before.

The final leg of the race was run by Run-Fast athlete manager Tom ‘Kiprop’ Payn who sped by so fast on his way out I couldn’t event get a photo. He has absolutely no idea how long it took him to get round but we’ll let him off this minor detail because WE WON!!! We can’t confirm yet but there’s speculation that we came very close to the course record…

Aside, from the winning part the LBH Bridges is a brilliant race. The atmosphere was so positive and friendly and it was great to see so many of the club runners represented. Considering that the route is not closed to the public you really have to appreciate the efforts of the organisers and the marshalls to put on such a good event. Testament to this is the fact that the number of teams that entered this year has risen to almost 200!

Post race everyone headed back to Run-Fast HQ for claps on the back and thimbles of bubbly and also to say farewell to our friend and colleague Justina Heslop, who is heading back to her hometown of Newcastle to become a mum. An accomplished athlete, Justina was positively chomping at the bit during the relay to pin on a race number and get involved! We’ll all miss her very much but will be sure to take her up on her offer to be on the race team next year.