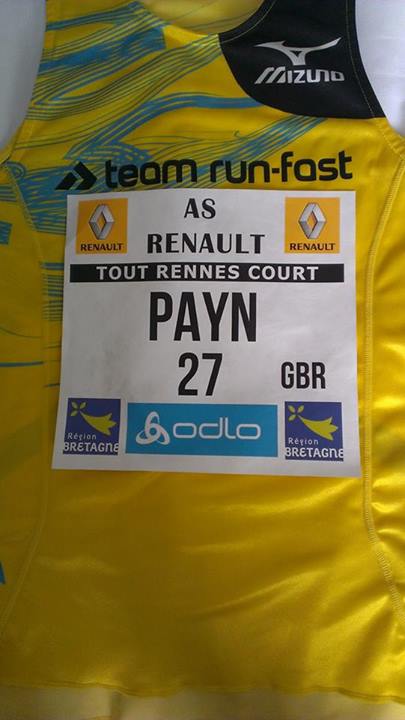 With only two weeks to go until the Frankfurt Marathon, I used the Tout Rennes Court 10km as my final tune up race. I have good memories from Rennes, as last year Edwin Kipyego won the race in what was, for me, the most exciting race I have watched as an athlete manager.

The Tout Rennes Court 10km is an elite only 10km comprising of eight laps around the city centre of Rennes. Throughout the day they put on other races of different distances, including kids races, but the final two events are the elite women’s 5km then the elite men’s 10km. Lots of the people who have competed in the other races wait around to watch the elite races, creating a great atmosphere.

This year in the women’s 5km we had Juliet Chekwel (Ugandan national 10,000m record holder) competing.

As first prize is a brand new car the competition is truly world class. Juliet competed very well finishing 9th in a new PB of 15:39, only 17 seconds behind the winner. She was very happy and you can never ask for more than a PB!

Next up was my race which, as I mentioned before, is an elite only race.

Five minutes before the start of the race each elite athlete is introduced to the crowd and you have to run 100m to the start line. It’s a great experience and I made the most of it by giving “high 5’s” to lots of the spectators. Once all the elites were introduced we were ready to start. Having experienced quite a few world class races over the last few years, I knew to be careful over the first half a mile or so as the pace the leaders go out at is incredible. I was hoping to have a nice group to run with at around 30 minute pace but this wasn’t to be. For the first few laps a few people sat behind me but they soon fell away and I was left to run what, in effect, was a good training 10km finishing in 30:59.

It was a great event with a really supportive crowd. I had cheers the whole way round “allez allez Payn”! After the race all the elite athletes were taken to a banquet in the middle of Rennes where we replaced all the lost calories with some good French food.

So now its nearly time to start the taper for my first “serious” marathon for quite some time in Frankfurt on the 27th October.