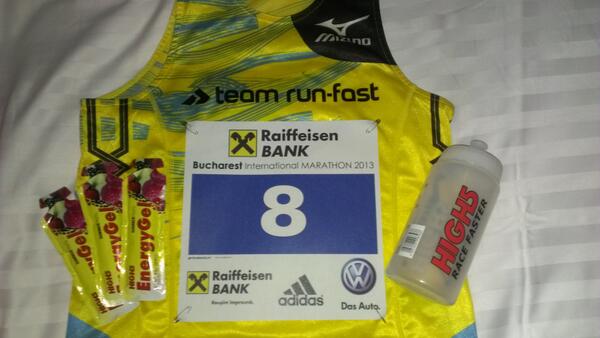 The last Sunday of September saw Run-Fast send a team of athletes to the Ikano Robin Hood Half Marathon in Nottingham. Last year we had great success at this race where Luka Rotich 61.39, so the athletes were excited as they knew this was a great opportunity to register a really quick time. On the men’s side we had Nicholas Kirui and Boniface Kongin Kiprop with Polline Wanjiku and Perendis Lekepana on the women’s side.

Nicholas and Boniface set off at a good pace going through the first mile in 4.48; working together they kept up this tempo pulling a big lead off the leading British athletes. Unfortunately at the 11 mile mark the course split sending athletes either to the finish of the half marathon or onto a big loop for the marathon course. I think the athletes were going a little too fast for the marshal who sent them the wrong way, finishing any hope that the athletes had of running a quick time. Both Nicholas and Boniface ran until about 15 miles before stopping and making their way back to the finish, both very disappointed and upset. Luckily the race organiser knew that this was a marshaling error and paid the two guys the prize money they were sure of winning so not all was lost.

The women ran together for an easy win, Polline coming in 1st on a sprint finish.

I had a very bad day at the office, probably due to a rather stressful week at home. I went off with Nicholas and Boniface through the first mile feeling quite comfortable but something wasn’t quite right. After about 6 miles I started to develop a blister on the ball of my foot and with the Frankfurt marathon only 4 weeks away I decided to pull out to stop any further damage. Disappointing but training has gone very well so I have to take my confidence from that.

This weekend I met up with three Run-Fast athletes in Bucharest, Romania. We had Kennett Kipkemoi and Megertu Ifa racing the marathon with Andrew Lesuuda pacing.

This was my third trip to Bucharest so I’m getting to know the area quite well. On arrival in the hotel I got in the lift with a guy that I recognised from somewhere ( I assumed he was another athlete manager that I had met at some other race) so I said “Hello, how are you? Haven’t seen you for a while…” He only really replied with one word answers, which I thought was a little strange, until he exited the lift and I realised where I recognised him from…It wasn’t another athlete manager – it was the former England football manager Fabio Capello! Shows how much I know about football!

The night before the race at about 2am we were all woken up by an earthquake that shook the hotel, nothing serious but it did spook the elite race organiser, Paolo who went outside to see what was going on. I fell straight back to sleep and my roommate Yuriy, a Russian athlete, didn’t even notice. It has been an interesting few days sharing a room with Yuriy as his English is as good as my Russian (non existent)! When I wanted to go running I’d do a funny running arm motion and we would go running; when it was food time I’d point at my mouth and we’d go to the restaurant. I showed him where I live in London and he showed me where he lives in Russia (Novosibirsk), that’s about as far as the conversation has gone.

Race day was an early start and a cold one, about 6 degrees. Baridi sana (very cold) as the Kenyans would say, but with no wind and the temperature predicted to rise to around 10 degrees for the start of the marathon things were looking good. Soon the time came for the race and the men set off at a good pace, Andrew did a very consistent, if not a little fast, pace at the front taking the lead athletes through the half marathon in just under 65 minutes. Kennett was in contention until around 35km where the pace just got a bit much for him and he struggled in the last 7km, holding onto third position in 2:19.

Megertu was in a similar position and just lost touch with the leader but getting the 2nd spot in 2:39. I’m not sure why the times were so slow as the weather conditions were perfect and the course is flat and fast, but I was happy enough with a 2nd and 3rd.

I started the race with the plan of running to around 25km at my marathon pace, this was a fairly lonely run but I hit my target so a good days work for me.

Next week I’m off to Rennes, France for a city centre 10km road race where the winner gets a new car!