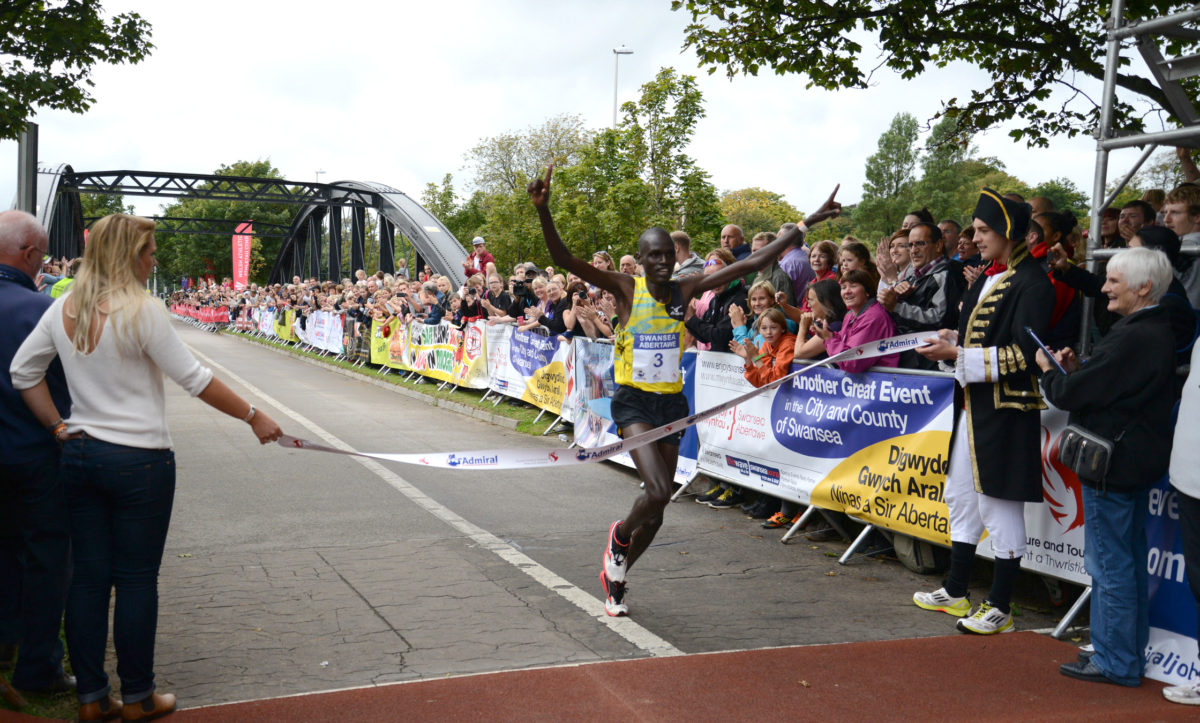 The autumn race season began in spectacular fashion for Team Run-Fast as the team took podium places at races all around the world.

8.9.13 – Matthew Kiprotich kicked off September’s string of successes with a win at the Cardiff 10k. Matthew’s first race in the UK since the Bath Half Marathon in March, saw him kick past Weyney Ghebresilasie to post 29:05 – almost 30 seconds ahead of his competitor.

Across the Channel in Germany, Frashia Waithaka lined up at the Muenster Marathon where she fought it out in a fierce women’s race, taking 3rd position in 2:35:51.

Boniface Kongin and Perendis Lekepana travelled to compete in the Portsmouth Victory 5 with hopes of setting new course records. Sadly the coastal winds had other ideas but this didn’t stop the pair leaving the rest of the field behind. Boniface breezed into the Mountbatten Centre athletics track for the final 400m, completing the full lap before another athlete made it onto the track, taking 1st position in 23:51. Perendis was on similarly fine form, finishing in 27:34, more than one minute ahead of the second female finisher.

Elsewhere in the UK Matthew Kiprotich and Nicholas Kirui were involved in an extremely tight finish at the Bristol Half Marathon. Nicholas and Matthew, along with fellow Kenyan Bernard Rotich, broke away from the lead group at the half-way point and the three battled it out until the very end. The athletes crossed the line within one second of each other, Rotich claiming 1st position in 63:56, narrowly scraping ahead of the Run-Fast athletes who clocked 63:57 for 2nd and 3rd positions.

Across the pond in the USA, Edwin Kipyego competed in his first Stateside race at the Rock’n’Roll Philadelphia Half Marathon. Edwin will be making his marathon debut in Frankfurt on October 27 so Philadelphia was the perfect race for him to put his training to the test. He did not disappoint. Despite suffering a heavy cold in the lead up to the race Edwin posted his second half marathon PB this year (60:04), taking 3rd position and another step closer to breaking the 60 minute barrier.

Back to Europe and the Wachau Half Marathon, Austria. Run-Fast team-mates Luka Rotich and Benson Oloisung’a led the men’s race from the start, both looking in great shape over the 13.1 mile course. A last minute surge put plenty of distance between them and Kennedy Kaptila but it was Luka who pushed for 1st position (61:10), beating Benson by one second and narrowly missing out on Robert Langat’s 2012 course record. Polline Wanjiku continued her winning streak by outsprinting Joyce Kiplimo to take 1st position in the women’s race in a time of 70:30.

22.9.13 – A quiet weekend for Team Run-Fast but no less successful. Peter Emase returned to the UK and, along with Polline Wanjiku and Gladys Ruto, travelled to Wales for the Swansea Bay 10k. The unusually humid conditions didn’t slow our athletes down; Peter Emase’s extraordinarily long legs carried him swiftly into 1st position in 28:44 while, unhindered by the previous weekend’s race, Polline raced to yet another victory and a new course record of 32:18. New signing Gladys Ruto took 3rd position in 34:30, a decent start for the team.

29.9.13 – As September drew to a close, Run-Fast athletes made sure to bookend the month with yet more success. At the Ikano Robin Hood Half Marathon, the seemingly unstoppable Polline Wanjiku topped the podium for the third time in as many weeks. Polline posted a time of 76:10 and she and team-mate Perendis Lekepana, who came second in 76:44, finished with a 12 minute lead on the third finisher despite taking a slightly wrong turn on the home straight and being so fast in the final sprint that the marshal did not have time to redirect them.

In near perfect race conditions Matthew Kiprotich and Gladys Ruto lined up for the second Ealing Half Marathon; a scenic course with many twists and rolling undulations. Both athletes stormed ahead in their respective races, neither losing any ground and both coming into 1st position three minutes in front of the second finishers, setting new course records; 64:33 for Matthew and 75:28 for Gladys.