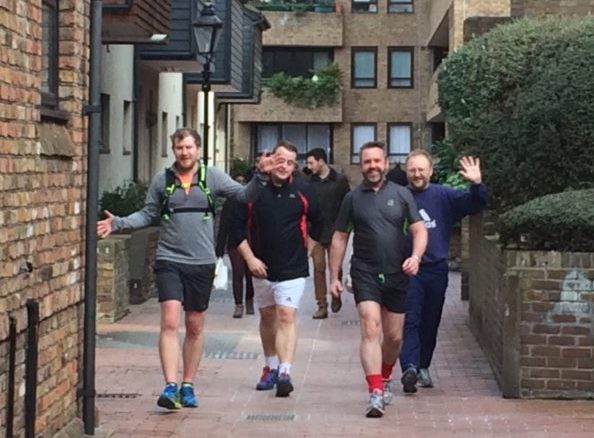 A long time ago in a City office not far away, our team delivered a talk about running, specifically our run club. We spoke about the virtues of running and announced our brand new beginners group that was about to start.

Nobody from that talk came to the first session. When the second round began we were delighted to see a familiar face. Tony has very kindly written about his experience of going from zero (running, that is) to absolute hero.

Over to you, Tony:

Well that was me.

Out of the blue some people who would change my life came to our office. They were from The Running Works run club and they spoke to us about something called Couch to 5k. In the past I’d done a little bit of cycling but had been put off by increased traffic. I’ve never been one for running but after some badgering by a colleague in a similar situation to join him on the programme I signed up. I was sceptical though.

It was a cold day in February when I turned up at The Running Works in an old tracksuit and an old pair of trainers. I was apprehensive and didn’t know what to expect, or if I’d be able to cope with running for the first time in years. There were quite a few people there. Some had been running with the group for a few weeks and a few new people.  The first person to speak to me was Nikki who, with a welcoming smile, introduced herself and explained that it would all be fine.

We walked briskly down to St Katherine’s Dock with Dave and started started with one minute of running followed by 90 seconds of walking. We repeated this for about 20 mins and then walked briskly back to the shop. That wasn’t too bad. I had coped with the running and was very pleased with myself, and the beginning of the running bug started to take hold.

This built up over a few weeks from 1-minute runs interspersed with walking to 2 minutes, then to 3 minutes. In week 4 we could run for 8 minutes non-stop, and looked back at how we struggled at running for only a minute in week 1.

The next few weeks looked a bit daunting on paper. The runs increased to 20 minutes, then to 25 but my confidence was growing and, surprising myself, I was enjoying it. Then came the final week when the aim was to run for 30 minutes and maybe cover 5km.

Just Dave and I went out that day. We left the shop and started running straight away. We’d left the brisk walk behind weeks ago and at a steady pace we set off for the dock. Soon we were out the other side and onto the canal path to the Shadwell Basin and things were going well. We circled the Basin and were on our way back. This is when things started to get hard but Dave encouraged me to push on. I think I’ll always remember Dave saying “Come on Tony, only 3 minutes to go,… only 2 minutes 30 to go, … only 2 minutes to go,…”

My legs were turning to jelly. I was struggling to breathe and a painful stitch was boring into my side but with his encouragement (or was it bullying?) we made it. When he finally said “Stop, we’ve done 30 mins” I think I might have punched the air. I’d done it. I’d run for 30mins and we’d covered exactly 5km. I was ecstatic and I think so was Dave at having coached me from the first day to achieving the 5km run.

That was in April and my running journey has accelerated from there. I run 6-7km twice a week (Monday and Thursday) with the running club at the shop. I’ve done a dozen parkruns on Saturday mornings and recently broke through the 24-minute barrier for 5km. I also entered the City of London mile, organised by the guys at The Running Works and did the mile in a smidgeon less than 7 minutes. (Thanks to Steve for a practice speed session a few days before the mile).

Back to the vital statistics that were all going the wrong way. Just this week I had a mini check-up and since I started running I have lost 9 kilos. My cholesterol level has dropped back into the safe zone and my blood pressure is in the normal range. I genuinely feel much better, both physically and mentally. The only downside is having to buy new clothes as my jeans were literally falling down as my waistline has shrunk.

The last 10 months has been life-changing. I have immense gratitude to everyone at The Running Works for making this happen. If you are that person who knows that you need to do something about your fitness but are nervous about getting started, go and see Nikki and Dave and they’ll have you running in no time.

“It’s great to see how far Tony has come since joining the Couch to 5k programme. His confidence has grown and every time I run with him he seems to enjoy it more and more. The speed at which he has gained fitness is amazing. He has improved from running 30 minutes for a 5k to sub 25 in no time and smashed the City of London Mile in 6:59. He is very dedicated and the reason is that his training is very consistent. I’m excited to see how much quicker he can get and how he gets on at various races.”