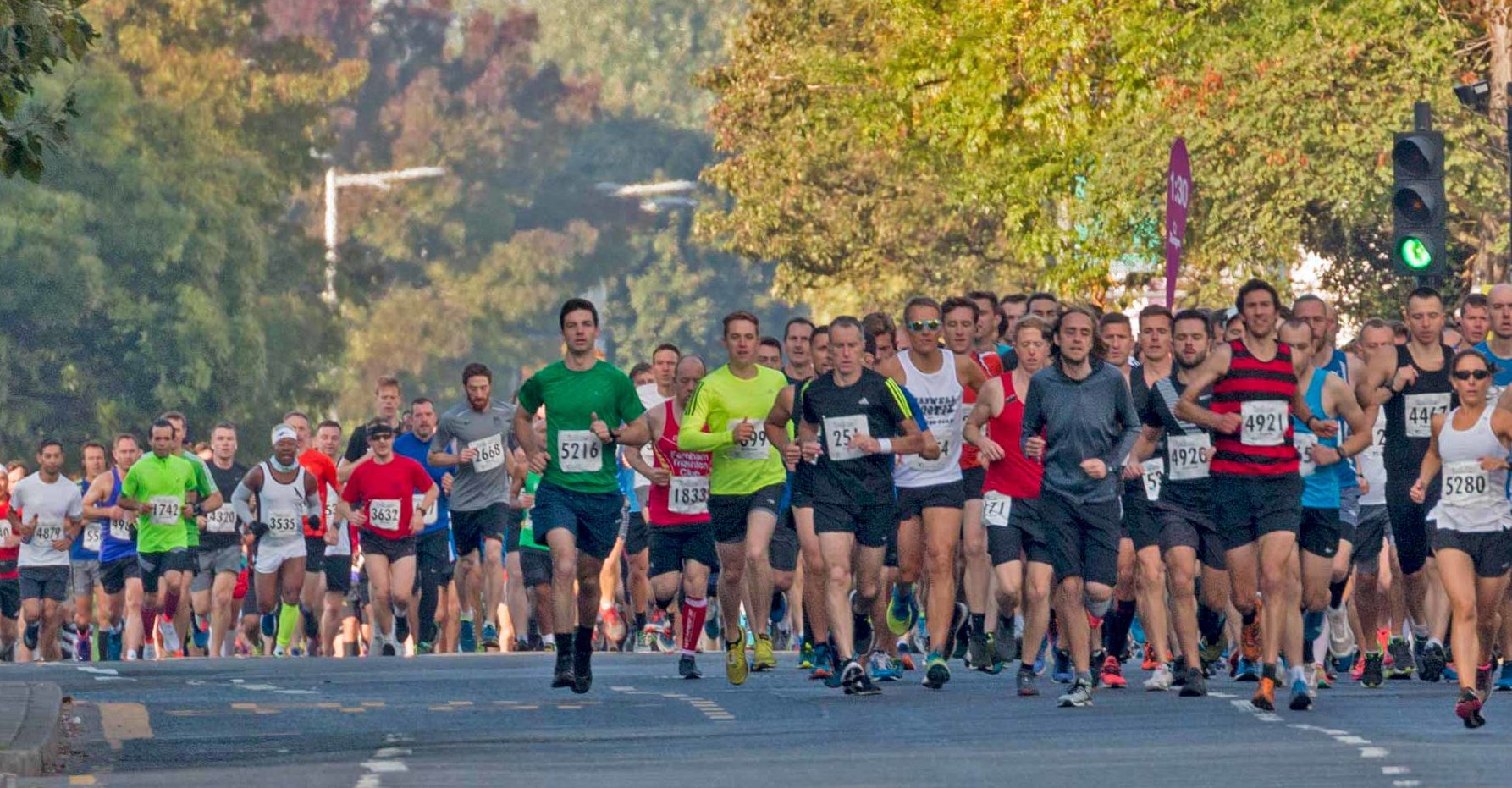 With so many races happening this year, we have compiled a list of some of the best events hosted in the capital. There is something for everyone, whether you are looking to participate in your first 10k or you want a flat, fast half marathon to smash that PB. 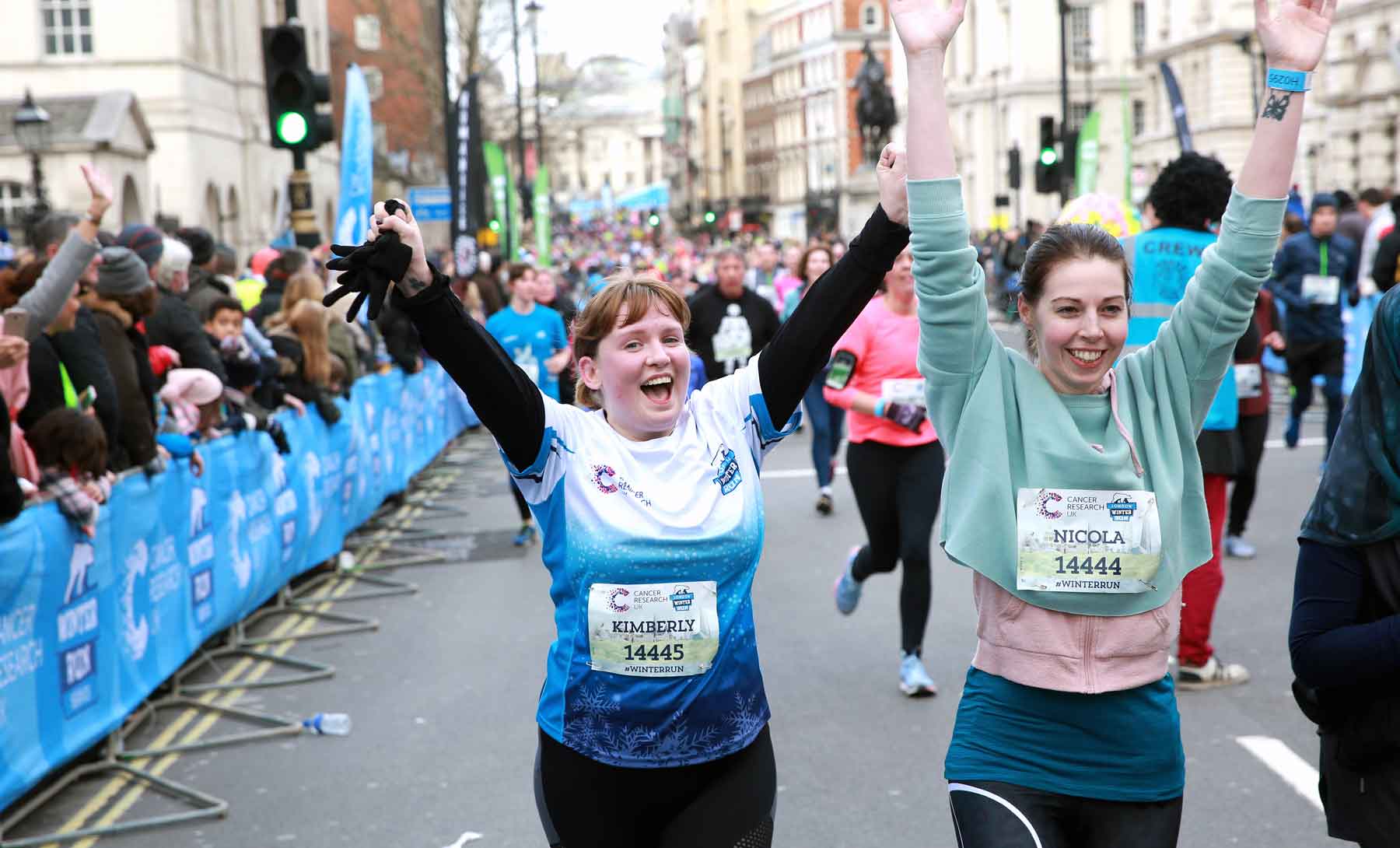 The Cancer Research UK Winter Run is a central London 10k which is set to welcome 23,000 runners on Sunday 3rd February, now in its 5th year. The race starts from Trafalgar Square, and takes a landmark laden route through the capital, it ends with a glorious finish on Whitehall just yards from Downing Street. On the course you can expect a Penguin Party, Husky High 5s, Live Music and at the finish, the famous Polar Bear Hugs.

The event raises over £500,000 for Cancer Research UK every year. 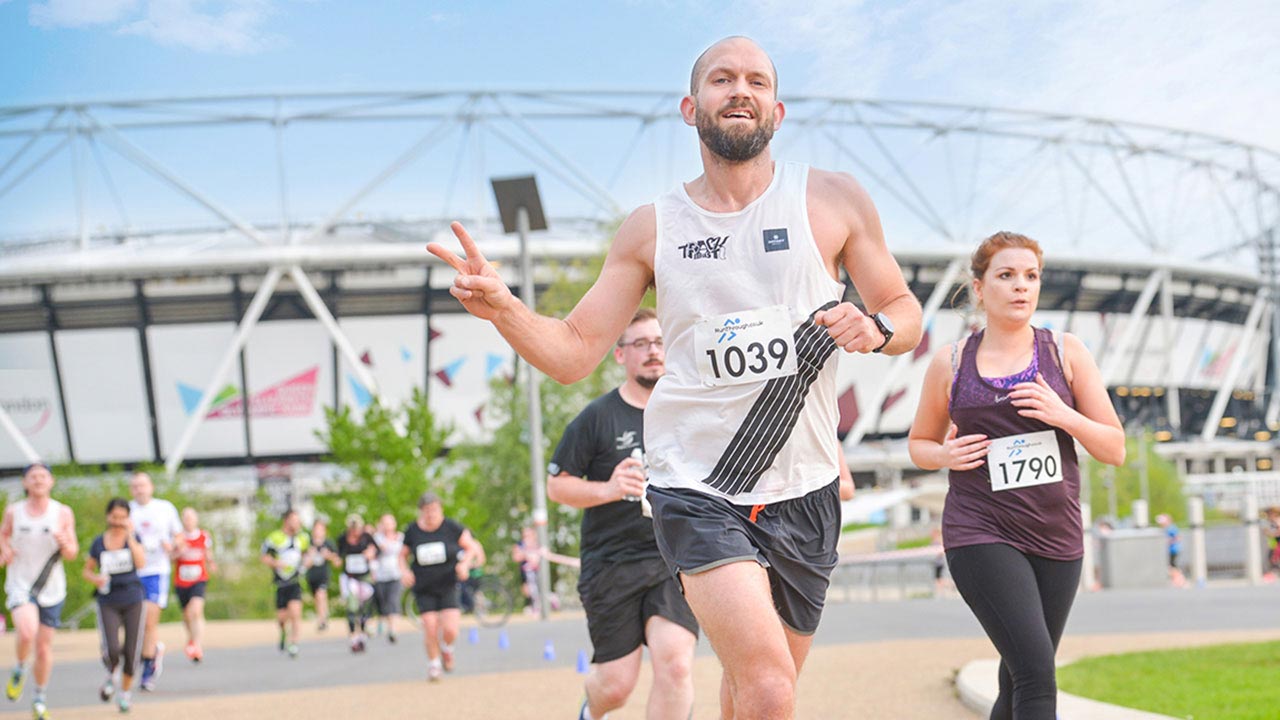 Starting and finishing inside the iconic Queen Elizabeth Olympic Park, the half marathon takes you past the London 2012 Olympic Venues before heading out onto the surrounding closed roads. The course will give you the opportunity to take in the inspiring atmosphere of the park and surrounding traffic free roads – this is the first half marathon on closed roads staged at the Queen Elizabeth Olympic Park!

The Vitality Big Half is a community running festival that has been created by London Marathon Events Ltd, in partnership with Sported. The one-day event offers a host of running distances, from a challenging half marathon to a free one-mile course, as well as a family-friendly festival of food, music and activities. The Big Half supports and encourages first-time runners to take part no matter your age, background or running ability. They want to create opportunities for people from all backgrounds to experience the health benefits of running – from weight loss and lowered blood pressure to stress management and better quality of sleep. 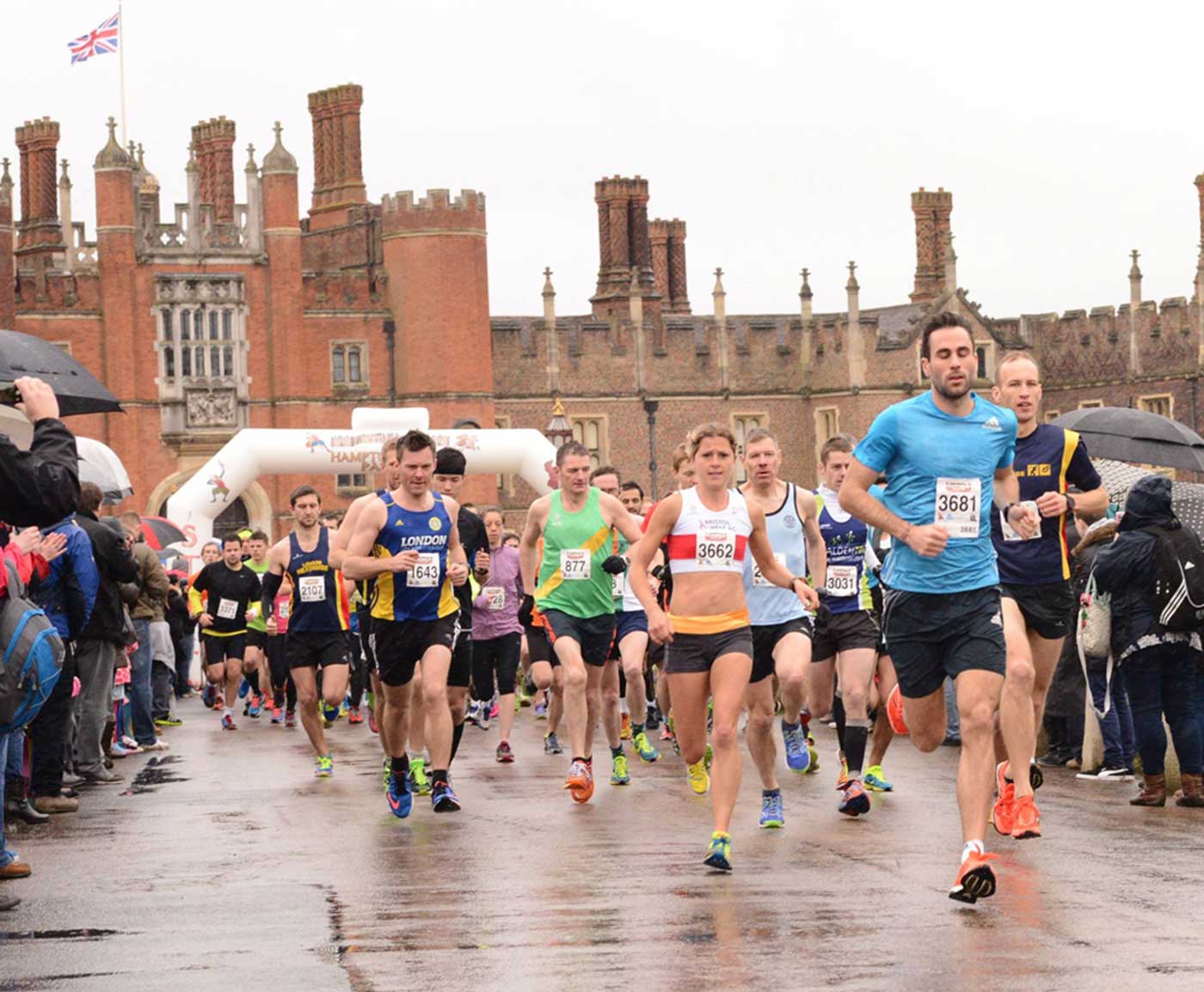 This is the only Half Marathon to be held at this famous and historic royal home. Hampton Court Palace is one of only two surviving palaces that King Henry VIII owned. The race will start inside the gates of Hampton Court Palace and finish in its beautiful gardens. After you’ve finished your race you can visit the famous maze and the world’s largest grape vine. If that wasn’t enough to get you signed up; the finishers medal is always spectacular, the route is flat, and it is just 5 weeks before the London Marathon making it a perfect tune up event.

The Hackney Half Marathon route takes you down Mare Street through a carnival of sound, past the famous Town Hall, through the historic Broadway Market and then Hackney Wick, which is flush with vibrant street art. You will also get to explore green spaces including Haggerston and Downs Parks, cross over twelve canals and rivers, and enjoy a panoramic view of the Olympic Park. Upon crossing the finish line, you will receive a technical finisher tee, a medal and a goody bag. Entry includes race photos, so you can proudly share your achievement.

The Vitality Westminster Mile is held on the most iconic mile in the world, starting on The Mall and finishing in front of Buckingham Palace. Organised by London Marathon Events Limited, in partnership with Westminster City Council, there are categories for all ages and abilities, so everyone can take part. There will be a series of races throughout the day and runners will be seeded according to predicted finish time, so entrants will be running with people of a similar standard whether that’s in a family, junior or elite athlete wave. The Vitality London 10,000 starts and finishes in St James’s Park and uses Green Park as its assembly area. The race starts on The Mall and finishes on Spur Road opposite Buckingham Palace. Runners follow a clockwise route around the City of Westminster and the City of London. The course passes many of London’s famous sights including Admiralty Arch, Nelson’s Column, St Paul’s Cathedral, Mansion House, the Bank of England, the Old Bailey, Somerset House, Big Ben, the Houses of Parliament and Westminster Abbey. As the course is flat and wide this would be a great race to target your personal best. 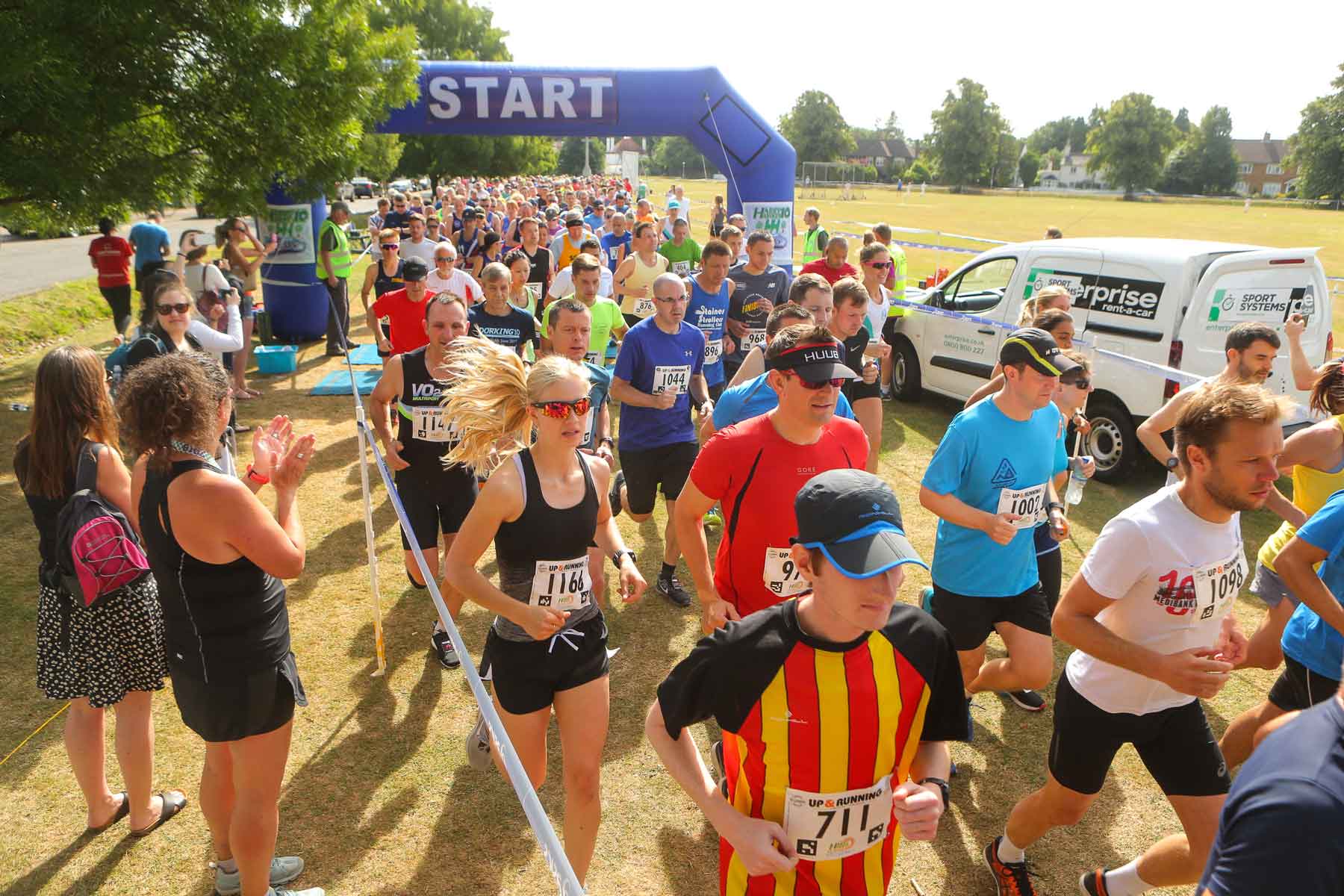 The Harry Hawkes Summer Raceday includes 2 races on the same day; The classic Harry Hawkes 10 mile plus The Ditton Dash 10K. The 2019 event will be the 33rd staging of the race since its inception in 1984. The Harry Hawkes 10 is a classic 10 mile run over a fast, flat and scenic course that offers great PB opportunities.  Runners will enjoy a route that takes them through the historic Royal Borough of Kingston upon Thames Marketplace, the picturesque village of Thames Ditton and the three mile stretch of the Barge Walk beside the Thames. Based alongside the Harry Hawkes 10 mile, The Ditton Dash 10K shares the same start line but sets off at the earlier time of 8am. Based at Giggs Hill Green, Thames Ditton, the runners will run around the Green and off towards Esher before branching into Ditton Woods after shortly before the 1k mark following a trail path through the woods the course then leads out into Thames Ditton. Returning through the woods for a second lap the race then returns to Giggs Hill Green for a finish close to the Thames Ditton Cricket Club. 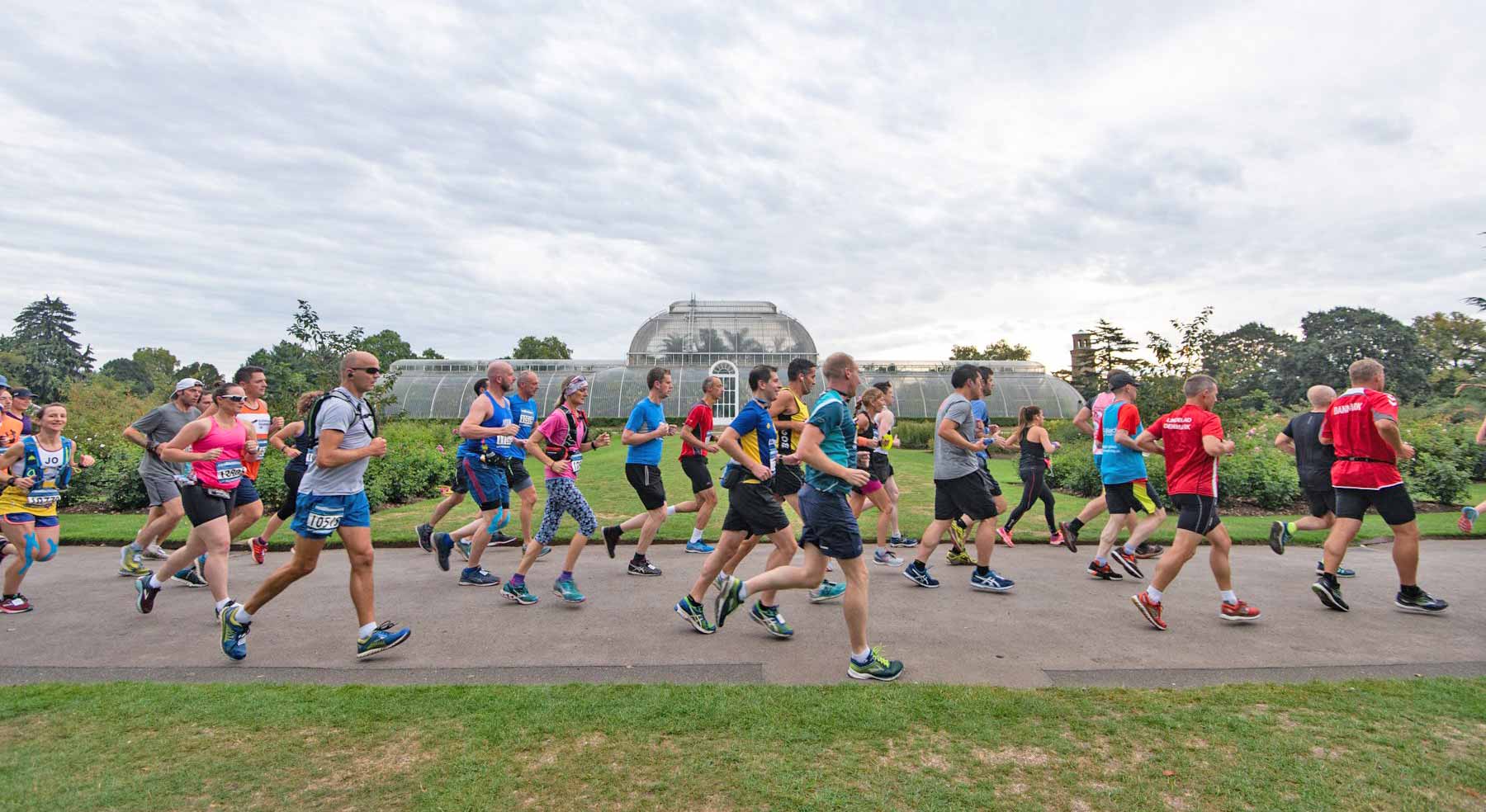 Run through London’s greenest borough including Kew Gardens, Richmond Bridge and Hampton Court Palace. The marathon sold out in April in 2018. With three famous bridges, two Royal Palaces and one famous river this race has been described as “the World’s most scenic Marathon!” Like the Richmond Half and Kew Gardens 10k, the RUNFEST Marathon starts inside Royal Botanic Gardens, Kew. The race will tour Richmond’s greenest borough, the highlight being the majestic Hampton Court Palace! 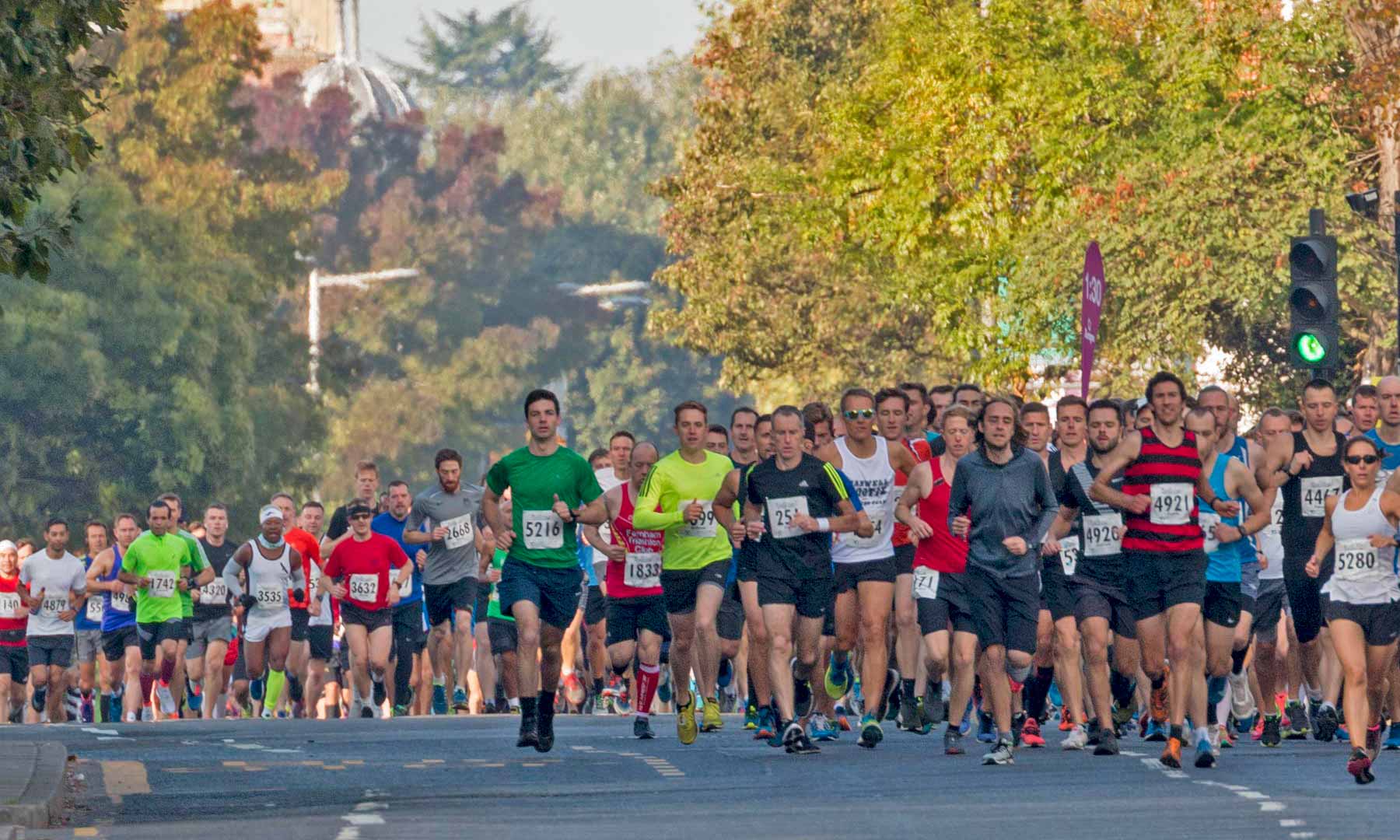 The Ealing Half starts and finishes in Lammas Park (Ealing W5 5JH) where the race and retail village will also be located. It is West London’s only fully road closed half marathon and multi award winning, making it a must-do in the running calendar. The 13.1 miles will still be run in a single lap, taking in parts of Central Ealing, Montpelier, Pitshanger, West Ealing, Hanwell and St Stephen’s before returning to Lammas Park.

The Cabbage Patch 10 is a race run by runners for runners and is almost as old as The London Marathon! It is one of the flattest, most scenic, 10 mile races in the country aimed at runners of all standards on roads and towpaths. Starting in King Street, Twickenham, the route crosses the Thames at Kingston Bridge and Richmond Bridge, runs along the Riverside to finish on the drive in front of the York House Civic Building in Twickenham. 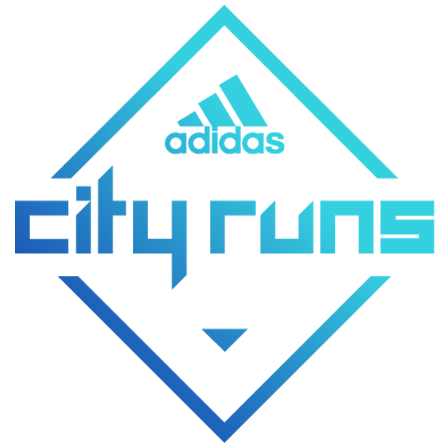