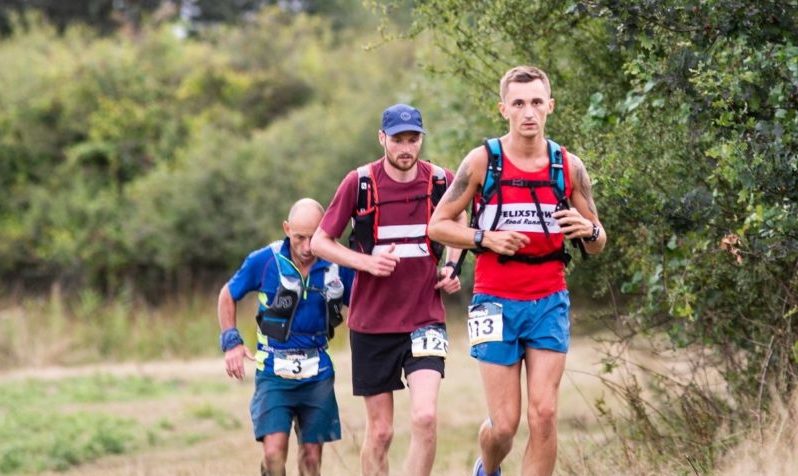 Running Works team member Steve Skinner decided to take part in the Stour Valley Path 100k as friends recommended the event and he wanted to gain endurance in training for the Munich Half Marathon.

I signed up to the SVP100 online in June. The process was easy as organiser Matthew Hearne used Eventbrite and entry cost £73.53 to be precise. Compared to some ultra marathons this is very good value.

The race starts in Newmarket and finishes near Brantham Leisure Centre. So runners could leave a car near the finish a bus was organised to get us to Newmarket. As my girlfriend Lorna’s parents live in Colchester I took advantage of this option. With the race starting at 7am the bus departed at 4:45am to arrive in plenty of time.

The SVP team checked  mandatory kit and handed out numbers efficiently. At 6:45am Matthew gave a race briefing before we all walked up the road to the start.

At the start of an ultra you experience mixed feelings, there’s still that adrenaline rush but you know to take it easy and settle into a comfortable pace. Running up the road I was joined by friends from Advent Running. Mel completed the 100k in 2017 whereas Matt was taking part in his first 100k. We settled into a pace around 7min/km and went through the first checkpoint quickly topping up soft flasks. Over the first 20k or so we were bunched up with quite a few runners, it was nice to chat with them and hear about their racing/training. The miles always go so much quicker when running with someone, generally ultra runners are friendly and happy to share stories. Between the first two checkpoints it was already quite hot and my legs were taking a while to get used to the uneven terrain.

Matt and I ran into the second aid station together and picked up food. Despite not feeling overly hungry at this stage we thought it was best to keep fuelled up. Just after the second aid station Matt decided to ease off the pace a little. As I was feeling good at this point I carried on, hoping at some point later in the race we’d be able to run a few more miles together. Although it is good to run with people I realised while taking part in Race to the Stones in 2015 that you have to run your own race and choose when to walk or run quicker. There was 10 miles between Clare and Long Melford, as I was on my own I checked my watch frequently to make sure I was following the blue line but also took the time to look around enjoy my surroundings.

Having lived in London for the last few years I really enjoy getting out onto trails and exploring somewhere new. When I ran RTTS in 2015 my right hamstring tightened just 18 miles in and I shuffled my way to the finish. I made sure to top up my soft flasks with water and SIS electrolyte tabs at every aid station.

The aid stations were excellent, they had sweet and savoury options to cater for everyone’s cravings. As there were roughly 10 miles between each checkpoint it broke the challenge down into manageable chunks. I always felt energised leaving each aid station having eaten and seen my cheer crew. It gave me a great boost every time I saw supporters, especially at Long Melford (around 33 miles) as I was struggling in the heat.

For the first time there was a 50k option which started in the afternoon and took runners along the second half of the 100k route. It was great to see friendly faces on the trail having fun, I was worried that in the latter stages of the race I would really struggle running on my own and the fatigue would take it’s toll. After my RTTS experience I was glad to still be running, albeit it slowly, 75k into the race. However, due to the undulating course my hamstrings tightened and I had to stop and stretch briefly. I knew from this point it would be a tough 25k to the finish but kept plodding away.

The food on offer at the last few aid stations was excellent and they were a lot busier with 50k and 100k runners passing through. I enjoyed salty potatoes, watermelon and flat coke to fuel the final stretch. Over the last 10k I was incredibly tired, every kilometre dragged and I couldn’t wait to reach the finish. It was frustrating wanting to run faster but my legs were so tight I could only manage a shuffle, I focused on ticking off each kilometre.

Luckily over the last few kilometres I had two runners alongside to work together. We were all tired so we didn’t speak much but having company distracted me from how exhausted my legs were. It was a great feeling passing the 100k point and knowing I just had 2k to go. After nearly 12 and a half hours of running I finally made it to the finish at Brantham Leisure Centre.

I shuffled over the line to be given my medal by Lorna, it was great to see her and friends. I was so relieved to finish the race in one piece.

If you’re considering your first ultra I’d highly recommend the SVP50 or 100. Everything was really well organised and the route was scenic.

If you’ve taken part in the event before, comment below to let us know how you found it.