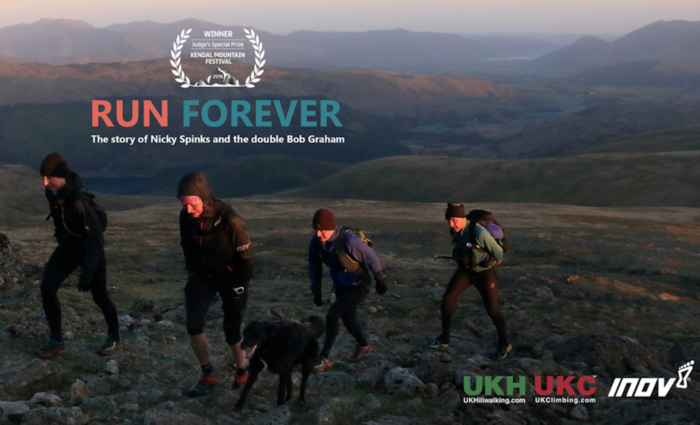 On Saturday 14th May 2016 at one minute past midnight, Nicky Spinks set off in the dark from Moot Hall in Keswick. Her aim was to complete the double Bob Graham Round in under 48 hours. The 132 mile route traverses 42 peaks around the Lake District with 54,000ft of elevation gain.

If successful, Nicky would be the first ever woman to break the 48-hour mark for this truly epic feat. To give some comprehension of the challenge, the overall record (46 hours 34 minutes) had been in place since 1979. Nicky would be crewed by experienced fell runners, including record holder Roger Baumeister and fell running legend Joss Naylor.

We were all rooting for Nicky and kept up to date with news from inov-8, her kit sponsor. I came into work on Monday to learn that Nicky had not only completed the double BGR, she’d broken the record by over an hour in 45 hours and 30 minutes. The minds of my workplace (and running social media in general) were completely blown.

Already an accomplished fell runner, this diminutive woman with trademark silver curls (who, incidentally, works full time on her and her husband’s farm) celebrated 10 years of surviving breast cancer in spectacular fashion. I couldn’t get enough of the subsequent articles about it. At the time I was yet to take my first gentle steps back into running after 10 months out due to an injury. I had tried, unsuccessfully,to make the transition from road running to ultra-marathon and felt very sorry for myself. The news was a kick up the backside to do everything I could to get back to fitness.

A couple of months later inov-8 organised some product testing for retailers up at their HQ in the Lakes. One of my colleagues was chosen to represent our store. He came back to work and told me that Nicky had been there and that he’d had the chance to run with her. I was beside myself. I had so many questions I wanted to ask and could only dream of running alongside one of my (s)heros. She kindly signed a tee shirt for me but I didn’t believe in a million years that I would ever meet her.

We hadn’t known that Nicky’s double BGR that attempt was documented by a film crew. The resulting footage was curated by director Nick Brown into a powerfully emotive 50 minute film, Run Forever. It premiered, fittingly, at the Kendal Film Festival and scooped the Judge’s Special Prize. It also came third in the People’s Choice Award category.

I sent a tentative email to inov-8 asking if they would allow us to screen Run Forever, maybe with a view to hosting a Q&A session with Yorkshire-based Nicky via Skype. Imagine the excitement when the reply came back to say ‘yes’ and that Nicky and the team would all be there!

Fast forward a couple of months and we welcomed 60 guests for the screening, complete with popcorn. The film is available to watch for free on YouTube but I’d deliberately avoided it. I wanted to keep the experience as special as possible and wasn’t disappointed.

I’m not one for spoilers but from the opening scene until the end credits the entire room was spellbound. We followed the panoramic vistas of the lakes and heard soaring winds on the peaks. It was really interesting to learn about Nicky’s running history. Most of us were aware that Nicky had defeated cancer. It was both sobering and emotional to hear Nicky and her family speak candidly about her diagnosis and treatment.

Afterward the film someone mentioned what a team effort it was. To me, watching Nicky and her crew, it seemed more like a family effort. She was surrounded by people who wanted her to succeed and accepted as an equal by the likes of Baumeister and Naylor. Nicky Spinks has the utmost respect of her peers and this was an important aspect of the film. It is particularly poignant considering that fell running is still a largely male-dominated sport.


Q&A with Nicky Spinks and Inov-8

Nicky answered questions from the audience on topics such as nutrition, race prep, earrings and what her next adventure might be. I always stand back at our events so as not to prevent the audience from asking questions. On this night, when the floor opened up I was the first person with my hand in the air.

We’ve been fortunate to have some wonderful guests in our shop. I’m always struck by their humility and tenacity and Nicky Spinks is no different. She has an infectious smile and has a knack for making people laugh. You can’t help but feel inspired by the woman who took up running after being called a ‘fat lass’ and has chosen not to let cancer dictate her life.

Please do watch Run Forever and share it with others. I guarantee that afterwards you will do at least one of the following things: