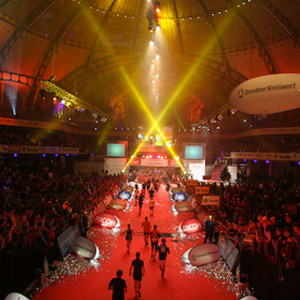 British athlete Dave Webb was forced to pull out of the British Olympic marathon team in 2012 due to injury. Having recuperated from his stress fracture Dave has worked extremely hard to balance the demands of his training schedule with changes in his personal life and becoming a father. This year his sights were set on the Frankfurt Marathon and Dave has been kind enough to share his race experience with us.

I arrived in Frankfurt on Friday afternoon feeling fresh and excited to be reaching the start line in one-piece without any major aches and pains. This is always one of the major challenges preparing for a marathon and it is reassuring to know that there is nothing lurking in the background that may cause you problems in the latter part of the race. Personally, there is always the nagging concern that my hips and lower back may tighten up but I had received plenty of treatment during the latter stages of the build-up to keep them relatively loose (I say relatively as I am never going to win any flexibility contests).

I was staying in the race hotel, which was very well equipped and shortly after arriving found out that my room-mate was Tom Payn, a fellow Run-Fast team member and the man who was responsible for arranging my entry into such a fantastic race. I used to share a house with Tom when we were at Birmingham University so it was great to catch-up with him and certainly helped run-down those last 36 hours before a big-race that usually seem to last for an eternity.

The food at the hotel was excellent and, although it was your standard pre-race fair, all the pasta was cooked freshly and bread etc was made on the premises. The quality of the produce meant that I didn’t feel the need to eat vast quantities that can often be a pitfall when you know a 26 mile run is around the corner.

Saturday was spent lounging around the room, trying to spend as little time as possible on my feet. It was punctuated briefly by a trip to the expo and an afternoon coffee but I achieved the objective of not doing much other than making a good dent in the book I had brought with me.

I slept very well considering such an important race lay ahead. I think having a young baby means that you appreciate every moment you get and pre-race nerves were outweighed by 6 months of accumulated tiredness. The daylight saving meant that we did not need to get up particularly early, especially given the 10.30am kick-off.

After a small breakfast of two slices of toast and honey we spent more time lounging around before slowly making our way to the start area. Interestingly, the elite tents had been placed in the only muddy area of grass near the start…despite the excellent organisation this was the only point in which it did not match up to the London marathon. I did my usual 10 min jog around 45 mins before the start followed by some light drills and a few strides. I always find it amazing how quickly the final half an hour passes after waiting so long for the race.

On the way to the start it was clear that it was a windy day. I could see flags chopping around and the trees rustling and just hoped that the numerous high rise buildings in the city, of which there are plenty given its position as the financial capital of Germany, would offer some protection. Unfortunately this proved not to be the case and from the opening few moments we were being swept in various directions.

As the race got going I tried to keep a look out for the 67 min pace makers. I managed to identify them pretty quickly and settled around 10 metres back. This gap wasn’t purely deliberate, it just took me a little while to get into my running and I didn’t want to extend myself early doors. The first 7 miles or so were spent weaving around the town centre and as we passed the various kilometre markers I could see corresponding signs for 38km, 39km etc so we got a sneak preview of what awaited us 2 hours down the line. This was somewhat disconcerting given the number of twists and turns coupled with the extreme wind. I was also pretty sure that I wouldn’t have the benefit of 10 other athletes to shelter behind at this point in the race!

After 10km my legs were still not feeling very sprightly, but at the same time I didn’t feel in any danger of being dropped. My breathing was extremely light and whenever any surges took place I was comfortable covering the moves. Our group consisted of two pacemakers, a host of foreign athletes and the more familiar figures of Phil Wicks, Nick Torrey and Anthony Ford.

As we approached half-way my confidence began to grow as my legs were beginning to feel better. I had just taken on my first High 5 gel which had provided a welcome boost and the benefits were starting to kick in. Also the group was starting to thin out, and without wishing ill on your competitors, it gives you a lift when you are moving well as others are falling by the wayside. That said there must have been 6 or 7 athletes remaining when the final pacemaker dropped out at 25km (despite my best efforts to get him to continue until 30km!). At this point I started to do a significant amount of work at the front as I didn’t want us to waste the strong first half (67.15) by entering a game of cat and mouse.

Between 25km and 35km myself and Nick Torrey alternated at the front and the honest pace led to our group being reduced to just 3 athletes as we re-entered the city centre. By this point we had endured a good half an hour/ forty five minutes of rain (late into a marathon things become a bit of a blur!) and hadn’t really got the upside of having the following wind that we had anticipated. Around 37km I noticed my legs started to tighten and the Belgian athlete that had taken a free ride over the past 10km started to stretch away. I suffered having missed my second gel at 30km and although I had begun to find the twists and turns difficult to handle I managed to stick with Nick Torrey, who was facing similar difficulties. Ultimately, he was able to stretch away over the final 600m and my dead legs meant that I had to simply run through the last km as best I could. Don’t get me wrong, I wasn’t fading drastically, I had simply entered a period of a gradual, managed deceleration.

I knew that I was on for a solid PB as I entered a packed market hall at the finish. Being greeted by thousands of screaming spectators, undercover and accompanied by strobe lighting was an amazing experience and I took time to soak it up in the home straight. Yes, it may have cost me two to three seconds but it is an experience I will never forget.

On reflection I am extremely pleased with the result. It was a PB by over 20 seconds that has come in period of great change in my personal and professional life. Having taken on a new job, moved house and become a father, these have been challenging times and I take a huge amount of satisfaction to have come through this period successfully. The general consensus is that the conditions were worth in the region of 90 seconds which gives me great confidence going into 2014. The plan is to completely bypass the 2hr14  barrier and move straight towards 2hrs13! After the injury troubles of last year I was left wondering whether the body would allow me to return to this level and it is a fantastic feeling to be running better than ever. I know need to take time to recover before launching an assault on a place in at least one of the major games next year.

I am now back into decent training and feel very excited about the challenges that lie ahead in the next 6 month.

Thank you Run-Fast for helping me achieve one of my major goals of 2013!