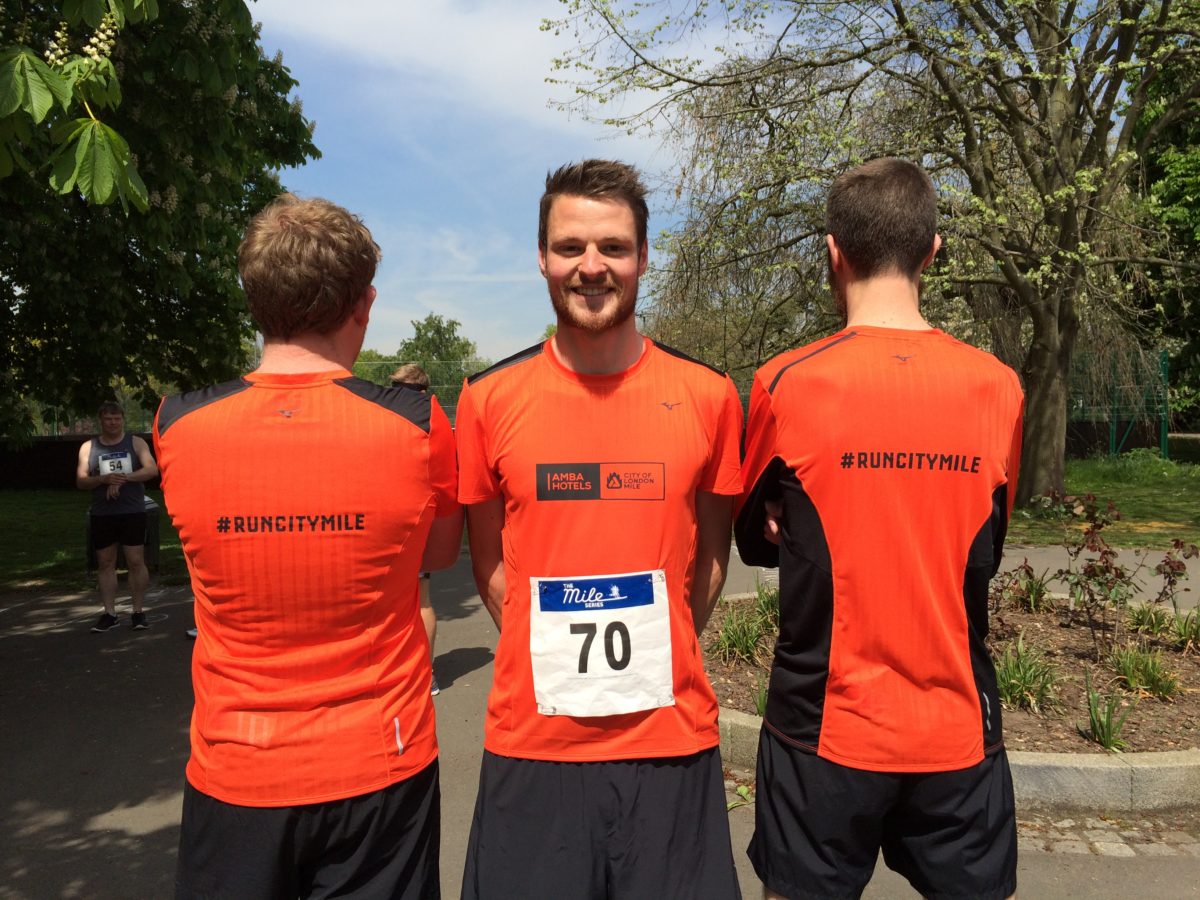 The City of London Mile

It’s only six weeks until the third edition of our race, The Amba Hotels City of London Mile. If you haven’t heard of it before it’s a free to enter one mile race in the centre of London.

The roads are closed to traffic and we host a series of race suitable for everyone. Whether you’re eight or eighty, a tortoise or a hare there is something for you at the Mile.

You can choose to walk or run the course, go round in your wheelchair or run with your grandchildren. The point is to make a one mile race suitable for people from all walks of life. Every finisher receives a medal and a chip-timed result eligible for Run Britain rankings and Power of 10. So although it’s free it is a ‘proper’ race.

The atmosphere is electric on race day is electric. It’s hard work to make sure it goes smoothly but worth it to see the finishers beaming when they’re done.

We’re all so busy on race day that we don’t get to take part and see it from the other side of the fence / race barrier. As such I had never run a solitary mile before. I’ve raced 3.1 miles, 6.2, 10, 13.1 and 26.2 but never a mile race. So I suggested to the team that we enter the Ealing Mile together and have a bash for ourselves.

The Ealing Mile is put on by the lovely team behind the Ealing Half Marathon on the first Friday of every month. I admit that, regardless of never having run a mile before, I was sorely unprepared. My running has been inconsistent at best thanks to an injury and subsequent issues resulting from it but I’d heard such great things about the Ealing Mile that I didn’t want to miss out.

Steve, David, James and I rocked up at Lammas Park, ready to run. The weather was bright and warm and we were joined by 18 other runners for the 12.30pm kick off. While preparing for our own race I’ve been privileged to hear some excellent advice from athletes and coaches at events we’ve hosted. I tried to spin them all round in my head while we were getting ready to run.

Naturally, the minute we set off I forgot every single thing.

As mentioned, due to not being able to run much my fitness levels are nowhere near where they were. I set off far too quickly, my legs clearly forgetting that they are of practice for fast running. I shot off like a rocket, around six and a half minute mile pace and (at one particularly idiotic point) sub-6 pace! What was I thinking? Of course it was completely unsustainable and at 0.4 miles I slowed considerably to around seven minute mile pace – around where I wanted to build to – but the damage was already done.

My lungs were exploding and I kicked myself mentally for being such a wally. As I blew up I ran over a lovely note written in chalk by race director Kelvin. He had predicted what I was going to do and exactly where I was going to do it. Clearly a professional!

I’d been running with David up to 0.6 miles but knew I was in a bad place so sent him on and slowed even more. I wish that I’d held on and accepted that it was a mental barrier that I could manage. As I turned the bend on to the final straight (cheered on by the Ealing Eagles one-woman cheer squad) I found my legs again for a sprint finish. My time was 7 minutes and 30 seconds and I’m ok with that. I know I’m capable of more, that I’m not that fit and that I played it all so horribly wrong. But for all the discomfort and frustration, I knew as I crossed the line I’d have another bash. Runners, eh?

Steve ‘Speedy Pants’ Skinner won the race in a PB by four seconds in 4 minutes and 58 seconds. City of London Mile race director James also didn’t hang about and came third in 5m18s. Even though I held him back for half of the race, Dave managed to claw it back in 6m57s!


If you’re coming to the City of London Mile race for the first time this year (and you really should!) then here are my tips:

I’m definitely going to try and get to the June Ealing Mile. It costs just £5 to enter (you can do that here) and is really well organised. Thanks so much to Sandra and Kelvin for having us!

Entry is open for the City of London Mile but it is filling up fast. The point of our race is to show people how much fun it can be to be active. By making it free to enter and for all ages we can truly say that we’re inclusive. We want everyone involved so GET INVOLVED. Sign up today here cityoflondonmile.co.uk and rest assured that I will be cheering my head off for you on June 19th.