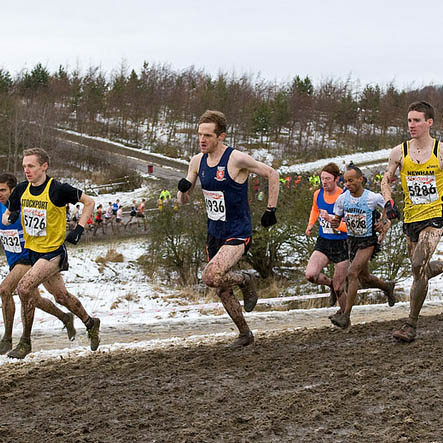 We’re very lucky to have a guest article from Chris Rainsford. Chris is a freelance sports journalist who has interviewed many stars of the athletics world, with an impressive Power of 10 profile of his own. Here Chris interviews Kent Athletics star John Gilbert about taking a different approach to marathon training…

Paula Radcliffe showed how easy it was to combine a fruitful cross country season with an eye-catching springtime marathon back in 2002.

Having already successfully defended her World Cross Country Championship title over the mud in Dublin three weeks before, Paula went on to run a course record and within nine seconds of Catherine Ndereba’s then world record when she made her marathon debut in London.

Fast-forward eleven years and British long-distance runner John Gilbert followed the same cross country-to-marathon blueprint to crack the top-10 in the English National Cross Country Championships for the first time before racing to a personal best over 26.2 miles in the UK’s capital.

After probably the most outstanding and surprising performance by a leading Brit in London last year, the thirty-three year old will be aiming to prove for the second-successive year that cross country and marathon-running dovetail perfectly and that success can be gleaned from both disciplines with the right graft.

“The strength you build up in cross country running definitely comes in useful for the marathon,” the Kent AC man said. “The cross country calendar is quite relentless so you know you are going to get a decent hard run over challenging terrain pretty much every two weeks. It gives your legs a decent blast and shakes out all that marathon mileage.

The softer ground is also more forgiving on your body so can help with injury prevention. Your feet are not landing in the same position every time like they do on a flatter surface and this helps keep your ankles nice and strong and flexible, which in turn improves balance and running technique.

I also really enjoy cross country. It is definitely my favourite of all the running disciplines I do – so perhaps I am a little biased!”

Whilst Derek Hawkins took the unfortunately much-derided accolade of fastest Brit on the day in 2013 – derided due to the fact the then twenty-three year old’s time (2:16:50) was exactly six minutes slower than the last Brit (Eamonn Martin) to win in London twenty years before – Gilbert started the race behind the elites in the Championship field and went on to snake his way through the field.

Smashing his previous best by almost two minutes when he crossed the line on The Mall in 2:17:43, the long-distance man also finished second in the Championship field behind only Irish international marathon runner Paul Pollock.

“I was doing a hilly fartlek before the National but that workout will now go so I can do the marathon-paced sessions with a training group at Battersea Park every week. I will also increase the mileage but nothing too drastic. Saturday will still be longer intervals, but probably not the cross country-specific interval session. I will also introduce some faster sections into my Sunday long run, which will also increase in distance but will be no more than 24 miles.”

Gilbert hasn’t rested on his laurels following his accomplishments last year and success on the mud in 2014 has led to high hopes on April 13th.

“I tend to do better when the marathon feels more like a race rather than a time trial.  In previous years I have felt a little isolated running large parts of the race on my own, but having said that I still enjoyed chasing runners down and leapfrogging on to the next group.

I’m hoping with all the places on offer this year [for Commonwealth Games and European Championships selection] there will be a strong domestic field to battle against.”