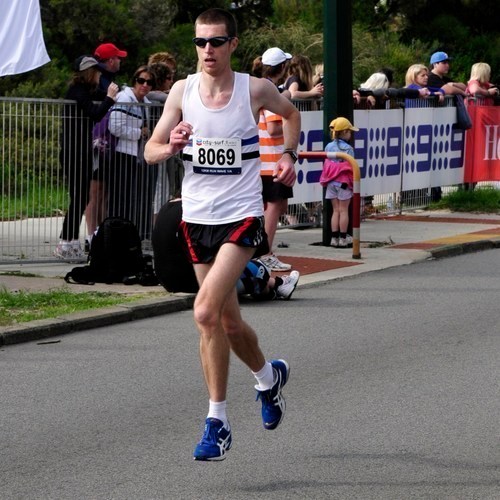 We’ll be spending some time chatting with runners over the coming months to find out how they came to the sport and what keeps them coming back for more.

First under the spotlight is James Ruskin. James is a freelance sports writer and photographer and a member of The Stragglers running club.

Hello James! Thanks for speaking to me. First off, what distances do you run?

I run anything 5k to half marathon, although I have completed a marathon or two.

How did you first get into running?

My first taste of it was probably cross country races at school when I was about 13 or 14, which I always enjoyed, and as well as that my Dad’s been a runner for as long as I can remember.

Can you remember the first race you took part in?

In a word – no! But it would probably have been while I was at school in Salisbury, either a 1500m on sports day or a local cross country race.

Which medal are you most proud of and why?

The one from my first marathon, which I did in France at the end of 2010. I think most runners can remember their first marathon pretty clearly – in a sense it’s a giant leap into the unknown, which is what makes crossing the finish line so memorable.

What would be your best / worst race experiences?

The best would have to be the City to Surf in Perth, Australia in August 2011 – a race that begins in the shadow of Perth’s skyscrapers and ends 12km later beside the beach and the Indian Ocean. About 14,000 people take part each year, and I’ve never experienced an atmosphere quite like it. The worst was probably dropping out of last year’s London Marathon at about 22 miles, having comprehensively run out of steam!

Are there any races on your bucket list and how likely are you to compete in them at any point?

In the UK, one I’ve wanted to do for a while is Race the Train in Wales. In Europe, Paris-Versailles and the 20km de Lausanne are two races I’d like to tick off in the next year or two. And further afield, I’d love to do the Sydney version of the City to Surf, the largest timed running race in the world (more than 80,000 people take part every year).

Are there any races you’d recommend to our readers?

Too many to mention! In the UK, the Black Rock ‘5’ for something a bit different, the Seven Hills of Edinburgh for scenery, the Wymeswold Waddle for atmosphere, and the Leeds Abbey Dash for 10k PB potential. Overseas, I can’t recommend the Midnight Sun Half Marathon in Norway highly enough: racing at night in broad daylight is an unforgettable experience. The same goes for the Great Train Race near Melbourne – essentially 3,000 people racing through valleys and forests, all trying to beat a steam train to the finish!

Where are your favourite places to train?

I’m lucky to live between Bushy and Richmond Parks – at any time of year, training in both of them is a privilege. Elsewhere, you won’t find many better places to train than the Meadows and Holyrood Park in Edinburgh. And last but not least, Club La Santa in Lanzarote.

What’s your breakfast of choice on race day?

Do you have any ‘can’t live without’ kit?

Got any pre-race rituals? The quirkier the better…


None that I’m aware of!

Having raced abroad, how did it compare to UK distance events?

Racing in the heat of the Australian summer took a bit of getting used to! A lot of the races there start at 8am while it’s still relatively cool. I’ve only ever had enjoyable experiences of racing abroad, and found the atmosphere of both races and running clubs to be as friendly and welcoming as is the norm in the UK.

What are the benefits / advantages of being a clubber runner (if any) as opposed to flying solo?

I think there’s a lot to be said for running with a club – in my experience, hard efforts like hills are just that bit more ‘manageable’ when done in a group rather than solo. That said, there are other sessions like tempo runs that I prefer to do on my own, so I tend to do a mix of running in a group, running with friends and running solo. As with lots of things in running, it’s all about finding what works best for you.